Home Destinations Canada Things to Do in Toronto: A Photo Essay

Things to Do in Toronto: A Photo Essay

This is a travel guest post by Shawn P. Thomas, photographer and travel enthusiast. While this article fits neatly in our “Things to Do” series, “Things to See in Toronto” is probably just as accurate considering what these striking photographs will offer you.

What do you think of when you hear “Toronto?”

Is it a big red maple leaf? Hockey? A snowy cityscape?

Sitting on the northwest corner of Lake Ontario and at about the same latitude as the border between Iowa and Minnesota, Toronto is the largest city in Canada and the fifth largest city on the North American continent. Consistently rated as one of the world’s most livable cities, with its many attractions and very friendly people, it’s a great place for visitors from all over the world.

From the gleaming high rises in the financial district and the 330 stores in the Eaton Centre to the cobblestone roads and brick chimneystacks of the Distillery District to the art on the streets and in the Art Gallery of Ontario, visitors will quickly discover a wide variety of experiences available. And they might even wonder if they should have planned a longer stay. This photo essay shows just a few of the many things to do and see in Toronto.

The Waterfront
While seemingly the vast majority of the Waterfront is currently under heavy construction, you can still easily walk down to one of the several ports to gain a great view of the Toronto Skyline. 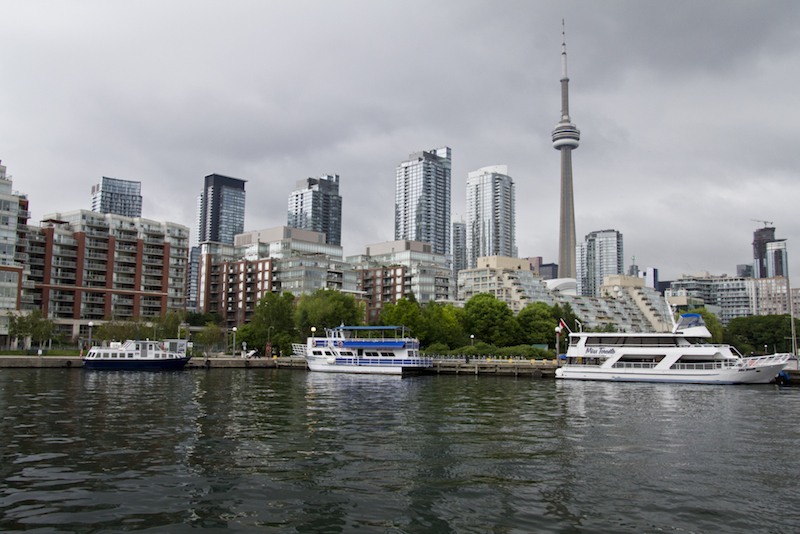 The CN Tower
Until 2010, when the Canton Tower was built in China, Toronto’s CN tower, standing at just over 1,800 feet tall, was the world’s tallest tower for 34 years. For those brave enough, the tower offers an opportunity to walk around its roof, tethered to to an overhead rail. 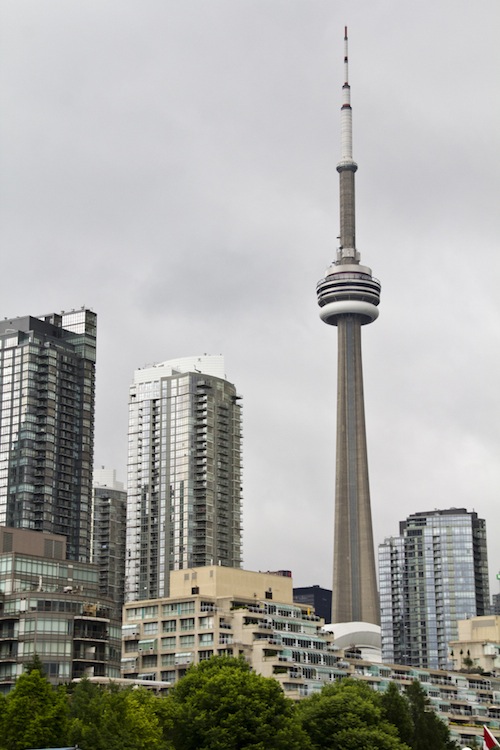 Chinatown
To the east of downtown Toronto and north of the entertainment district lies Chinatown, with its Chinese shops and restaurants and eye-catching murals such as this one located just off of Dundas Street. 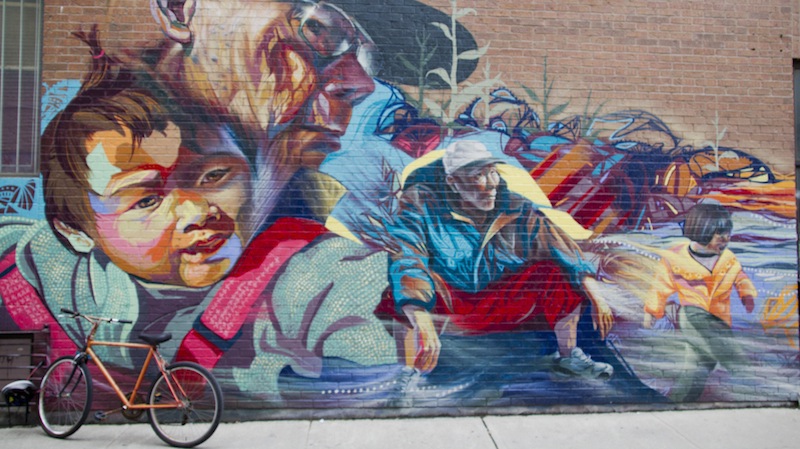 Eaton Centre
With more than 50 million visitors each year, Toronto’s downtown mall is one of the the city’s top tourist destinations. Here we see a “flock of birds” perpetually gliding overhead. 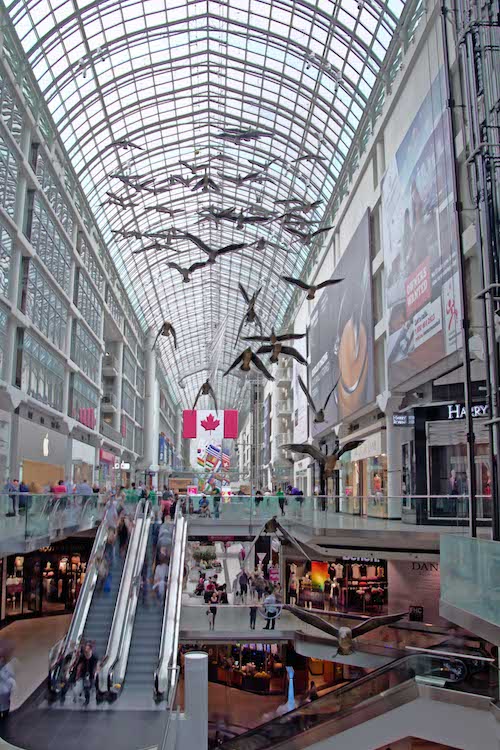 Yonge-Dundas Square
Just outside of the Eaton Centre, at the intersection of Yonge and Dundas, lies a rival to New York City’s Times Square, with its large screen LCD displays and billboards and an array of fountains for visitors to walk through. 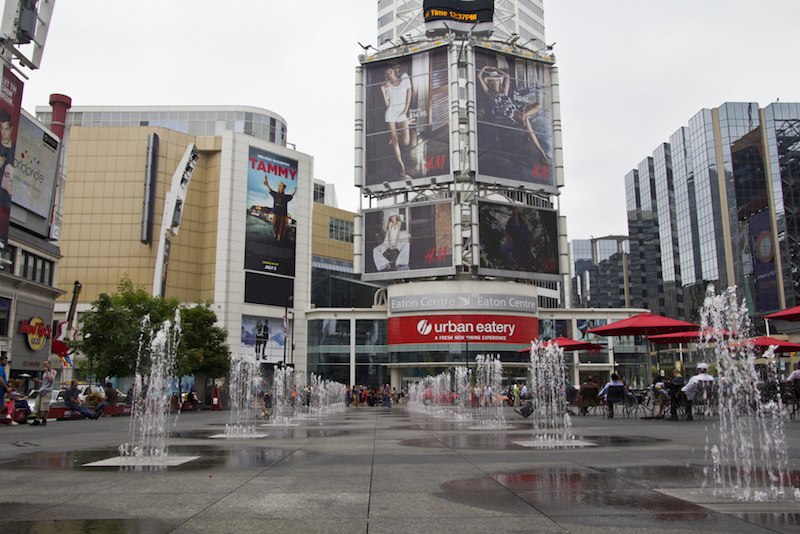 Financial District
Exit the Toronto subway at Union Station and you will walk up to the surface to see the golden Royal Bank Building gleaming in the sun.

Flatiron Mural
On the edge of the financial district and Old Town lies the flatiron Gooderham Building with its Flatiron Mural, by Canadian artist Derek Michael Besant. This is just one of the many examples of impressive public art pieces scattered throughout the city. 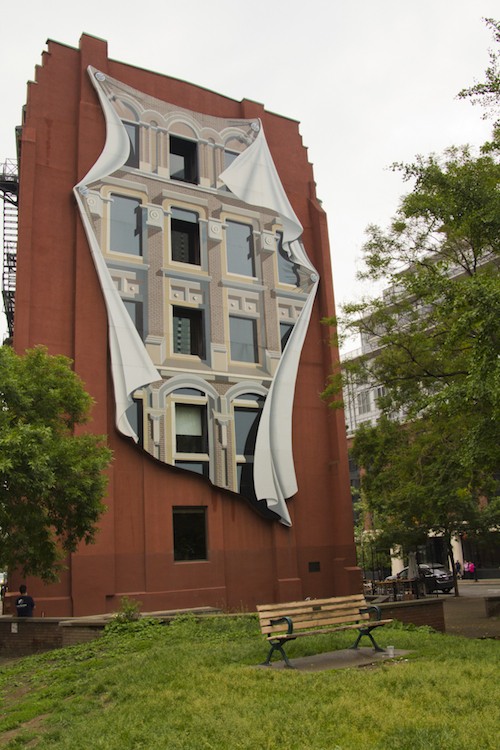 Distillery District
Sitting next to the brick buildings and on the cobblestone roads of the Distillery District you may find the old trucks used to transport the whiskey made in what once was the largest distillery in the world. Now, the district is a pedestrian-only area filled with unique boutiques, art galleries, restaurants, coffee shops, and the Mill Street Brewery. 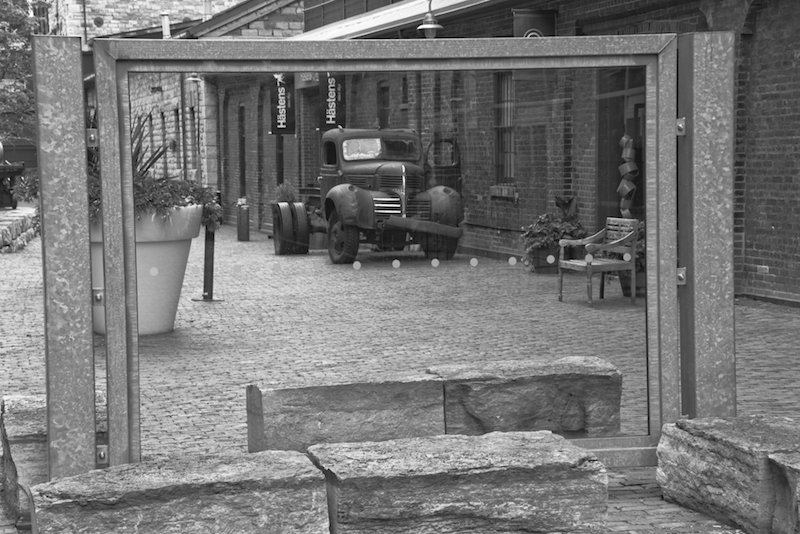 I.T.Sculpture by Michael Christian
Although Toronto has plenty of attractions, don’t miss this great work of art, also in the Distillery District. Inspired by “The War of the Worlds,” I.T. is a 40’ tall steel sculpture imagined and created by the artist Michael Christian. Definitely a sight to behold. 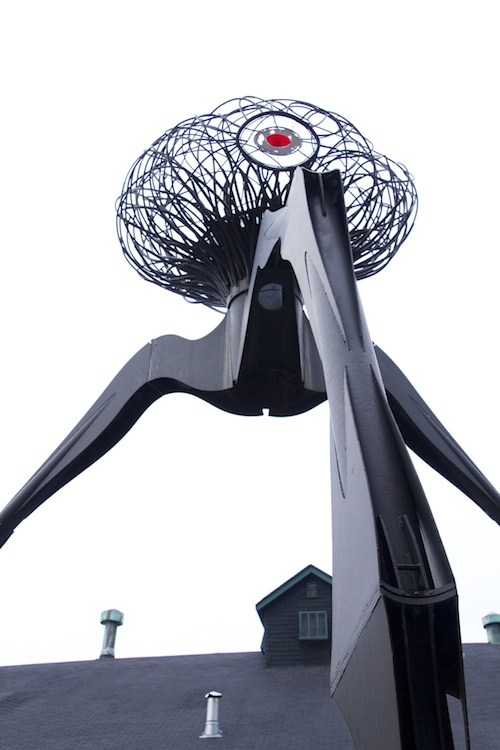 Pride
Toronto hosted WorldPride in 2014 and the whole city was adorned with symbols and messages of acceptance and compassion. 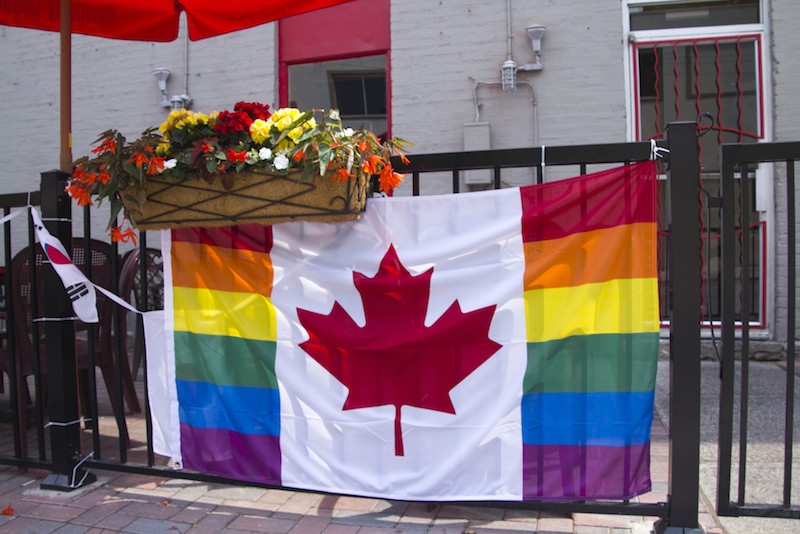 We hope this photo essay gives you some great ideas on things to do in Toronto. If you stop to admire the art in the city, and find the art in the mundane, you will no doubt have a memorable and beautiful visit.

To see a few more pictures of Toronto, visit our Pinterest board: 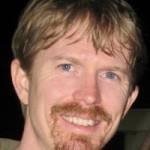 Shawn P. Thomas has a way of capturing majestic moments in time and space with his camera.  When you explore his portfolio you can expect to be pleasantly surprised by new perspectives on scenes both natural and manmade. You may have never seen streams, skylines, and the odd duck quite like this before. (NOTE: If you plan to share these photos, please attribute the photographer with a link to his site per creative commons licensing: http://www.shawnpthomas.com.)

Want to submit your own photo essay? Contact us here.