Puerto Rico’s music is the sound of its culture.

From the moment you touch down in Puerto Rico you may begin to hear its siren song emanating from restaurants, a nearby radio or even a local humming their favorite tune. In this article we cover six music genres and offer you five videos for a richer experience of Puerto Rico’s diverse music.

Today, modern music styles such as salsa and reggaeton dominate the local music stations, but if we go further back in history we hear more of the traditional styles. Born from a background of Afro-Spanish rhythms, different genres of Puerto Rican music have evolved like so many branches on the Darwinian tree. Lucky for the rest of the world, each of these branches/genres of music are delightful and charming in their own way. Let’s begin by going back in time a few centuries.

Jíbaro
The original folk music of the Spanish-descendant mountain settlers is called jíbaro (HEE-bah-roh), which means “people of the forest” in the native Taíno indian language. It consists of playing more traditional stringed instruments such as the cuatro (five double-strings) and the tiple, and it emerged in the 16th and 17th centuries with the Spanish settlers who lived a rather isolated existence in the mountains. Here is a short modern-day sample:

Bomba y Plena
Beginning in the early 19th century, a distinctly African and French Caribbean influence was beginning to emerge in the island music. Although Bomba y Plena are technically different styles, to the untrained ear they can sound somewhat similar with their driving drumbeats and folk accompaniment. Bomba is especially accentuated by live performing dancers, and Plena came to be popularized in the 1920s-40s by artists who adapted the music with more of a “big band” sound.

This short (3.5-min) but very well-done video documents some of the rhythm and dance from a renown family in Puerto Rico:

Other music genres we cannot attribute specifically to Puerto Rico, but trace their origins from Spanish, French Caribbean, and African influences. In the 1800s, for example, the formal “Danza” style of music became very popular and even influenced what has come to be the national anthem of “La Borinqueña,” which originally was sung in an operatic fashion, but which has been modernized as seen performed here by this very talented duo:

Salsa
With incredibly popular salsa music, the roots begin to crossover with Cuba as this genre became popular in both areas around the same time – the 1950s. This style of music became an incredibly popular export to New York by the 1960s and is still enjoyed today. To pay homage to beautiful blend of cultures, here is a video featuring Tito Puente (Puerto Rico) and Celia Cruz (Cuba) – may they both rest in peace for the amazing legacy they have left us.

Reggaeton
If any dance music has taken Puerto Rico by storm it is reggaeton (reg-ah-TOHN). Having some basis in Jamaican rhythms, it has evolved into a blend of reggae and rap. Because most of the videos involve scantily clad women and the glorification of some illegal activities – what we might call a rebellious youth culture – we’ll let you search for these on your own. 🙂

Puerto Rican Pop
Judging by the likes of Ricky Martin and Chayanne, you’d think that all you need to be a pop star in Puerto Rico is to be an attractive man singing and dancing in search of his ideal woman. And if this isn’t true, it’s at least a decent theory. Something you may recognize in modern pop songs are the driving beats whose roots lie in African rhythms, and delicate guitars which offer echoes of the jíbaro stylings, both of which play a prominent part in this Chayanne song:

We hope this has given you a good overview of Puerto Rican music – ¡música con sabor! 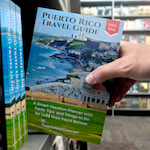 This music made for a wonderful backdrop to our adventures, which you can read more about in the Puerto Rico Travel Guide, now available on Amazon as an e-book. (No bulky books to pack!) We were absolutely blown away by our beautiful, affordable experience in Puerto Rico and want to encourage others to visit and fall in love with the island much like we did.